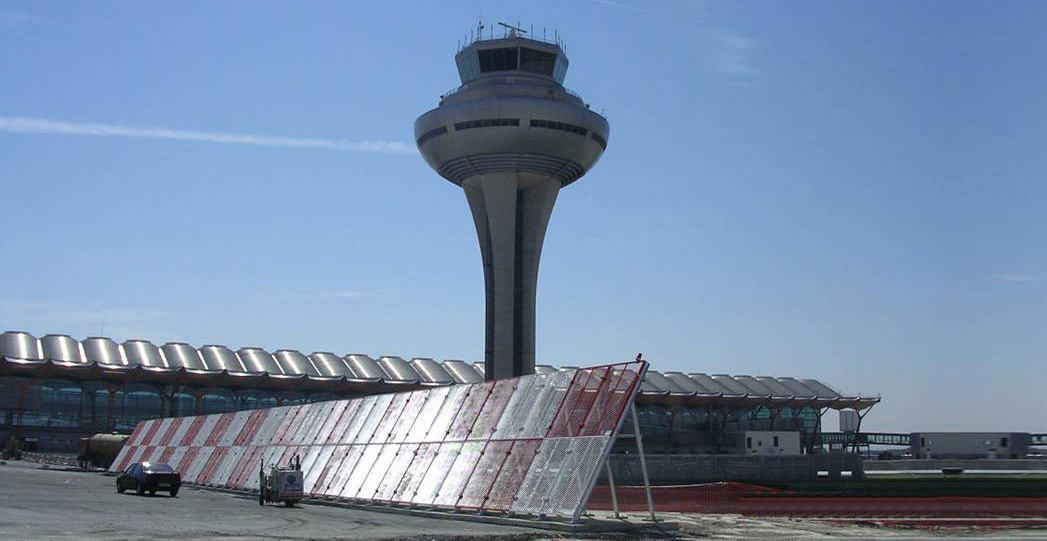 Jet Wake barriers are safety devices which redirect high-energy exhaust from a jet engine to prevent damage and injury. The structure must be strong enough to withstand the heat and air flows at high speed, as well as the dust and dirt carried by the turbulent air.

IAC Acoustics A/S’ Mesh Type Jet Wake Barrier is characterised by having a particular metal net which diverts the jet blast and spreads it upwards at an angle of between 60º and 80º. As the jet stream runs through the barrier, it is mixed with the outside air, which both cools the air and reduces its speed.

Another advantage of our Mesh type Jet wake Barrier is that you can see through it, which has great importance in terms of safety. Since this allows you to both see and hear that there is a plane on the other side.

Mesh Type is also available in a version which is not inclined 90 degrees, but is placed vertically against the underlay as a regular wall.

Jet Wake Barriers also go under names such as:

IAC Jet Wake Barriers are painted in the approved aeronautical colours of red and white in accordance with the requirements of international CAA guidelines. The barrier is made of galvanised steel and has an aesthetically pleasing expression.

IAC Jet Wake Barriers are inclined 30º and are 3m tall. The barriers can either be attached directly to the ground or mounted on concrete blocks, which can be moved into place by a forklift. The barrier is delivered from the factory flat-packed on pallets and assembled directly on-site with standard tools. In addition, it is modular and easy to move.

The barriers have been tested in wind tunnel by the INTA aerodynamics laboratory in Torrejon. This type of Blast Deflector is effective in wind speeds of at least 130 km/h.

Give us a call!

Learn how we can help you
and your business!